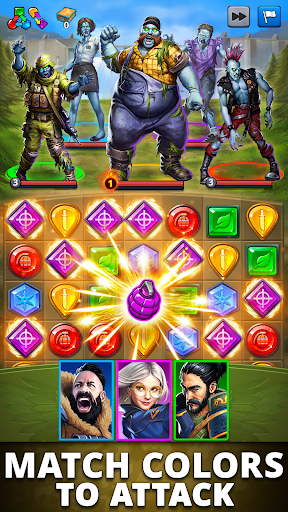 Puzzle Combat is a dynamic match-3 action game from the award-winning studio behind Empires & Puzzles!

Lead a squad of epic Heroes to the glorious Victory against the deadly Cobalt Army in this new dynamic match-3 game, combining strategy and role-playing elements into ultimate action experience.

FOLLOW THE STORY
Play main campaign, or participate in side quests and live events to collect powerful guns and heroes! Fight zombies and epic War Machines to get great loot.

BUILD THE BASE
Build and design your military base, where you can farm resources and train your army of epic Heroes to win any battle.

CUSTOMIZE YOUR GUNS
Collect and upgrade guns, rifles, explosives and many more.

PLAY WITH FRIENDS
Join an alliance to participate in alliances’ wars and raid War Machines for a better loot.

ZOMBIE MODE
Stand your ground against hordes of zombies.

LIVE EVENTS
Participate in themed events and immerse yourself in the world of Wild West, cyber punk post-apocalypse, heists, zombie invasions and other exciting set-ups.