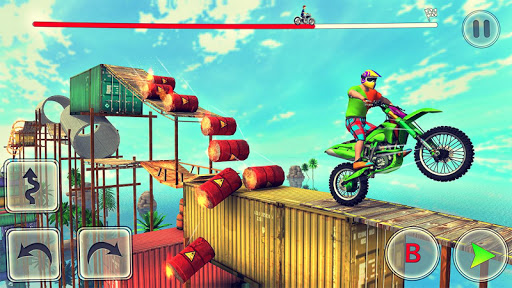 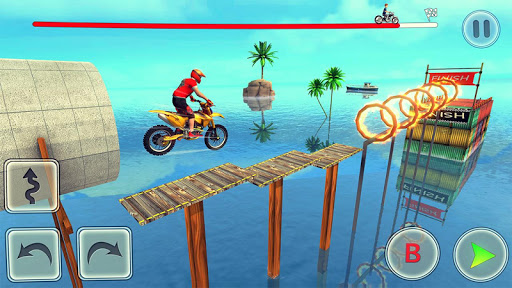 Welcome to a new dimension of thrill and adventure, the definitive bike racing experience. Join the forces of millions of users who love to simulate bike games and want to become bike riders with ‘Bike Stunt Tricks Master’. Compete with them in the new multiplayer mode of bike race. Contest in real bike stunt championship multiplayer mode and become the champion of bike games. Bike stunt tricks master is the ultimate free mobile game available on play store. Bike stunt game is available with upgraded bikes and crazy riders. Make the most out of our game and become the pioneer of racing games. On popular user demand Bike stunt game now comes with localized languages.

Become the tricks master:
Dominate the arena of bike race by performing stunts in racing 3D game. Bike race game made special with unique stunts and challenges in racing games. Become one of the best mobile game users who can perform unique stunts. Put on the helmet, start your motorcycle and become a part of this bike race game adventure. Helmet is crucial and decides your fate in motor bike stunts, you will know it by the end of the game. Moto games adventure is now easily accessible on the screen of your smartphone. Simulate bike driving in one of the best offline games.

Face the Hurdles:
Avoid the hurdles and obstacles to pave your path to greatness in bike games. Drive professionally and perform crazy moto stunts to become the perfect stuntman. Learn motorcycle driving tricks to complete the challenging tasks on time. A bike game that makes you forget about all car games, bike race games and other water games with simulation. Become a real stunt man of bike games with this water stunt game.

Out of the Ordinary:
Progress through the career of your motorcycle games and aim for maximum stars. Brand new bikes added to bike wala game to perform crazier stunts; choose your bike keeping in mind the grip, acceleration and flexibility. Choose from the best of new fleet of bikes, with customization and up-gradation options. Earn coins by dominating the track and spend them on your bikes. Turn this crazy bike stunts mania into race championship with your passion.

Realistic Bike Racing:
Bike wala game comes with realistic controls, it is as if you are driving your real stunt bike in bike race! Bike racing game now comes with a garage. Park your collection of bikes and modify them in your very own personal garage. Bike race is no longer boring with a garage all to yourself in racing games. Customize your bike in offline games with your own choice of paint and parts. Bike racing is now more fun in this stunt game. Bike racing game made realistic and fun.
Convenience and Fun:
Play it anywhere, this bike game does not require any Wi-Fi connection as it falls in the category of offline games. You can enjoy racing in the subway, while ﬂying on a plane, in the car, on the road, anywhere! anytime! It’s always going to provide you thrill and fun. Bike wala game is now part of racing games. Make the most out of bike games as they no longer require an internet connection.

Free of Cost:
In this free game you don’t even have to pay a single penny, just tap to start the stunt game. Bike stunt game available on Google play store. Enjoy the bike racing game, it is a free of cost bike stunt game.

We are working consistently to assure the best gaming experience for our valued gamers.🕹
App id com.knights.bikesstunt.motomaster